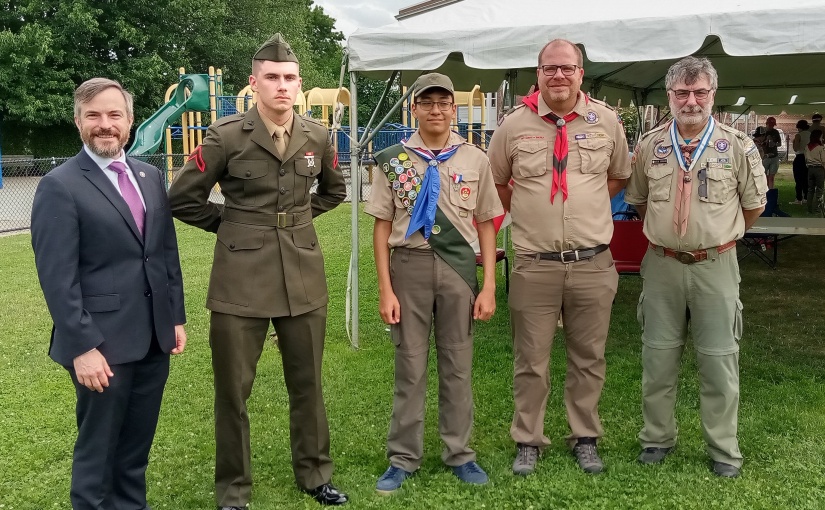 The event was held at the Lowell School, where Patricio attended grade school.

On his way to the rank of Eagle, Patricio chose a service project where he worked with Troop 30 and Pack 30 to collect coats for homeless veterans.

A proclamation from the Watertown Town Council was offered by Town Councilor Vincent Piccirilli, who has known Patricio since he was 3, moving to Watertown from his native Peru.

Patricio Pino started joined Watertown’s scouting tradition when he was in first grade, joining Pack 30 as a Tiger Scout. In Cub Scouts, he learned teamwork and joined in outside activities, until in 2014, he crossed over to Troop 30.

Patricio’s favorite activity in scouts was the Thanksgiving trip, where the entire troop roasted turkeys in the woods and served dozens of Cub Scout families a meal they could all share together.

As he progressed in scouts, Patricio earned leadership positions, eventually becoming leader of the Baconators Patrol, then Assistant Patrol Leader, and finally he was elected Senior Patrol Leader in October 2020. The hardest part of scouting, he said, was learning to lead fellow scouts in Troop 30.

To earn the rank of Eagle, Patricio needed to complete 21 merit badges and a final merit badge project. He originally wanted to collect coats for a village in his native Peru, but the pandemic halted those plans. He instead collected winter gear for American veterans living in Boston.